In today’s blog post we’re going to solve the “A Thing Called A Stack” challenge from PicoCTF.

Clicking on the challenge, we see the following: 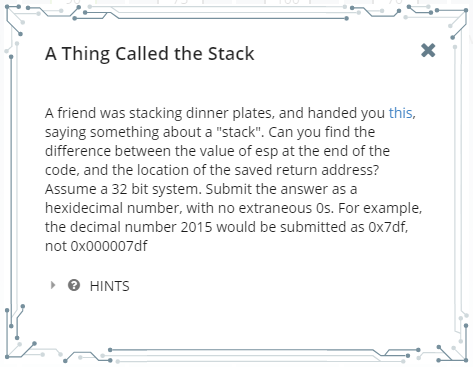 OK, so we’re given a file, and we need to determine the difference between the value of esp at the end of the code, and the location of the saved return address.

Looking at the hints we see the following:

We’ve encountered two different questions. Where is the return address saved, and what commands actually affect the stack.

DISCLAIMER: I haven’t worked with assembly in probably 8 years. So, what did I do? Go to YouTube.

I have linked the video here.

Opening the file (Notepad++ is great!)

We see the following: 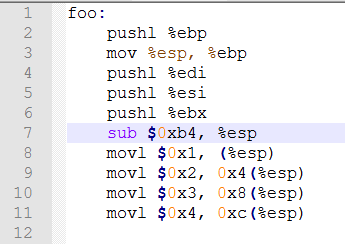 First we’re pushing the ebp (base pointer) onto the stack.

Next, we move the esp (stack pointer) to be at the same location to the base pointer.

Next, we push edi, esi, and ebx onto the stack. Note these instructions don’t change the stack. This solves question #2 in the hints section.

Doing this we get the following: 0xc4

A hacker's thoughts on hacking ALL THE THINGS! View all posts by thefluffy007